Density is king. We’ve led the industry with the design and manufacturing of our game-changing high-density Tungsten Super Shot (TSS). An industry first, TSS is made from a 18.1 g/cc density tungsten alloy, which means the shot size can be reduced and pattern retention is increased. That means sending more shot down range with increased knockdown power. And our TSS shotshells deliver the most consistent patterns in the industry. APEX utilizes this ultra-high-density tungsten shot in its Turkey, Upland, Waterfowl and Predator hunting loads.

The powerful component behind our TSS shells is Tungsten. It is the highest density non-toxic metal that is approved by the U.S. Fish and Wildlife Service.

The premise is straight forward, when the density is increased, the shot size can be reduced without losing knockdown performance. Lead has a density of 11.34g/cc giving it more inertia and energy at impact than steel shot which comes in at 7.86g/cc.  That is why lead was predominately offered in smaller shot while our common steel loads are in larger sizes; mass of the pellet making up for the lack of density. Alternative non-toxic alloys have been created with densities as high as 13-15 g/cc. None, however, have ever come close to our TSS, which has the ultimate density of 18.1 g/cc. This superior alloy allows the versatility to put more shot in unmatched payloads creating the most effective pattern. 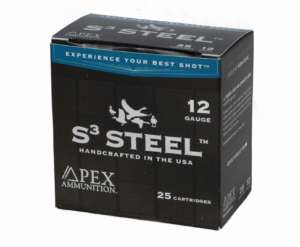 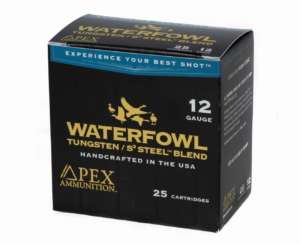 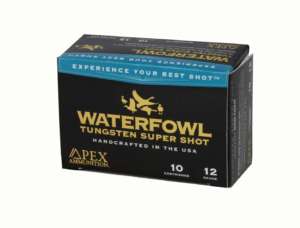 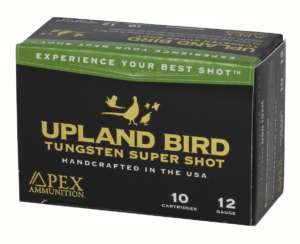 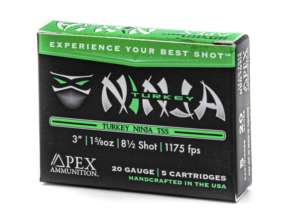 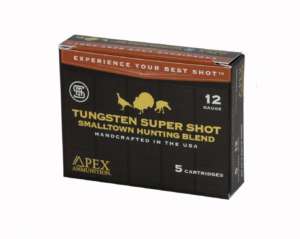 Apex Tungsten Ammunition has been a true Game Changer for Trophy Pacific Eiders and King Eiders bringing our 1 shot kill percentages up to nearly 90% while using APEX with Aleutian Island Waterfowlers Island X. Thank you for making a great product.

Best turkey loads on the market…… the shot count and knock down power of TSS are remarkable!

You’ll never look back or wonder is there something better. This is the best shotgun load in the world by far.

Absolutely has changed the game love toting a 20 instead of a 12 with even better results. Veteran owned is a no brainier. #ApexStopsTheFlop.

Highly recommend Apex for all your hunting ammunition needs. Nothing hits harder and kills quicker than Apex’s TSS rounds. Their customer service is top notch, and they have a great group of guys calling the shots.